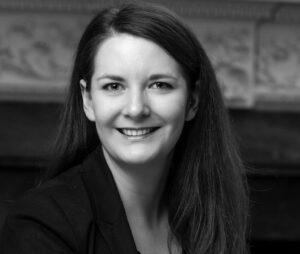 Annabel Gough joined 15NBS Chambers in September 2020. Annabel is currently working on secondment with the Financial Conduct Authority on a large-scale criminal investigation in the Unauthorised Business Department.

A passionate and driven barrister, Annabel prides herself on her approachable manner and ability to put clients at ease with clear and thorough legal advice. In court, Annabel successfully explains complicated, technical points to the tribunal in a clear and compelling manner.

Annabel is instructed in the full range of criminal offences, extradition cases, civil human rights claims against the prison service and has a strong interest in medical regulatory matters. Annabel is also a Level 2 CPS Panel advocate. She utilises her background in science to apply a methodical and forensic approach to case preparation.

Annabel has a particular experience in working with youth defendants and dealing with the complex issues surrounding their personal circumstances and advocating the fair treatment of young people in the criminal justice system.

Annabel has specialist knowledge dealing with DNA evidence since prior to pupillage she obtained a degree in Molecular and Cellular Biology specialising in DNA. During this degree, Annabel worked in a Biomarker Discovery company where she focused on the different techniques and limitations of DNA extraction. She followed this work on as a paralegal at Herbert Smith Freehills in the Intellectual Disputes team working on large international life sciences patent litigation cases.

R v TB (youth) [2019] – Wood Green Crown Court – Represented a 16 year old defendant who
pleaded guilty to an unprovoked section 20 GBH offence. After the Youth Court sentenced to 18
months Detention and Training order, successfully applied for bail pending appeal in the Crown
Court. The appeal against sentence returned an 18 month Youth Rehabilitation Order with Intensive Supervision and Surveillance.
R v ST [2019] – Ipswich Crown Court – Represented a young woman pleading guilty to attempting to smuggle cannabis and tobacco into HMP Highpoint. Achieved a rare suspended sentence for this
type of offence of 4 months suspended for 12 days with 10 days of Rehabilitation Activity
Requirement.
R v SW [2019] – Kingston Crown Court – Successfully advocated for a suspended sentence for a
Defendant found guilty of dangerous driving, driving whilst disqualified and without insurance after trial whilst having over 25 previous driving offences.
R v EG [2019] – Croydon Crown Court – Successfully defended an appeal against conviction for a
neighbour harassment and assault case with a vulnerable defendant. Dealing with various mental
health issues and complicated evidential chronology between the parties.
R v HH (youth) [2018] – St Albans Youth Court – Defending a 15 year old accused of 2 robbery
offences as part of a 4 person group. Successfully made representations to the court and the
prosecution resulting in guilty pleas to two assault by beating offences and a sentence of a 3 year
conditional discharge.
R v ND [2018] – Basildon Crown Court – Defended charges of possession of a bladed article in a
pharmacy and a section 4 Public Order offence of a Defendant with a long history of offending. A
Goodyear direction was requested and resulted in a 12 month suspended sentence, rehabilitation
requirement and a short tagged curfew.
R v BC [2018] – Uxbridge Magistrates’ Court – Successfully defended charges of two domestic
assaults. After a long legal argument on the admissibility of the 999 call and police body worn video
both were found to be res gestae and the charges were withdrawn.
R v AR [2017] – Romford Magistrates’ Court – Successfully defended a section 4 Public Order offence in a domestic context whilst on licence for a serious violent offence. The prosecution case called the complainant, her mother and her sister. The defence case included evidence from the Defendant, his mother, sister and new partner. Even with the prosecution amending the charges after the complainant’s evidence the Defendant was found not guilty.