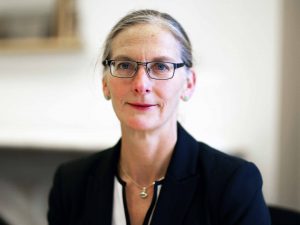 Julie is a highly sought after and skilled barrister with a busy and successful Crown Court practice. She specialises in rape, sexual offences, and cases with vulnerable witnesses or defendants. Julie has both prosecuted and defended cases of child cruelty, harassment, violence against the person, especially in domestic or family circumstances and sexual offences in the civilian and military courts, and undertakes instructions in gang related crime, drug offences, road traffic and military law.

Julie has a pragmatic and practical approach to her cases. Her involvement in intermediary and vulnerable witness training in both the UK and Republic of Cyprus means she has an in-depth knowledge of how to facilitate communication, and gain the best evidence from witnesses in stressful situations, and to cross examine and fully present a clients case. This has resulted in repeated instructions in rape and sexual assault cases involving children, those with learning difficulties, mental health issues, or where matters of cultural sensitivity arise.

Julie’s prosecution practice includes historic and recent interfamilial rape and sexual assaults, marital and date rape, and cases where alcohol or drugs remove the ability to consent. In addition to prosecuting care workers for sexual matters, she has experience in handling cases of long term theft and financial abuse, where the complaints were elderly, or had severe learning, and physical difficulties. As a result she is experienced in dealing with complex disclosure involving schools, local authorities and social services as well as issues of capacity and fitness to plead.

When defending in the civilian and military courts Julie fearlessly represents her clients, and is known for her ability to build a rapport with those who are difficult, or have difficulties comprehending the situation they face. Such cases include an adult with learning difficulties accused of sexual assault, marital rape, harassment and domestic violence.

Dip HE Education. University of Birmingham

R v V – successful defence of a soldier falsely accused of sexually assaulting a young female in a guardroom.

R v B – Representing a young soldier with sole care of his child, accused of assault and child cruelty. The charges were dropped and he received a small fine from his commanding officer prior to the court martial hearing.

R v A – Successfully prosecuting an Honour Crime in the lower and appellate court: A young Muslim had groomed a teenage relative over the telephone, and on her arrival in the UK raped and filmed this. He then used the footage of this and later rapes to facilitate sexual abuse, blackmail and physical assaults over a two-year period. His threat was to expose her sexual activity to her family and the Muslim community, putting her life, and reputation at risk.

R v C – Successfully prosecuting a Bollywood film producer, for the sexual repeated sexual assaults of his wife’s two younger sisters, [16 and 14] whilst they were resident in the UK, along with the physical assaults and attempted rape of his wife. The giving of evidence for the three young Muslim ladies was cultural difficult and sensitive, in addition, there were cross allegations in respect of the family court and immigration tribunal.

R v J – The successful prosecution of J, who raped, and held a young girl in his flat, after she missed the train home, following the Notting Hill Carnival

R v A– Was a prostitute and drug user, she was enticed to a dealers flat where she was repeatedly raped. She had contacted the police, and part of the conversation and threats between them was captured. The case turned on identification evidence, and witness credibility. A was sentenced to 8 years.

R v K – The prosecution of a pub landlord who raped a customer, whilst she was drunk and sleeping it off. The defendant unsuccessfully argued the issue of consent.

R v B – The prosecution of B, who raped a girl, whilst she was intoxicated. B denied intoxication and argued consent.

R v S – Successful prosecution in the Youth Court of a 12 year old who orally raped a 5 year old. Both boys required intermediaries,

R v T – Arson with intent to endanger life. Ms Taylor was accused of pushing burning rags through a neighbours letterbox. Her defence was that her son, who had learning difficulties, had committed the crime, as he was obsessed with fires.

R v M– Had been a care worker for S who was 80 years of age, she had access to his bank cards, and accounts, although the terms of her contract specifically prevented this. She was a friend of H, who had cereal palsy, learning difficulties and a personality disorder. H gave her access to her bankcard, but only for limited use. The savings accounts of H and S were systematically emptied over a 12-month period. M argued she had not removed any money other than that which she was permitted to, and others, unknown must have had access, due to the frailties of S and H. S was unable to attend court and Julie successfully argued his evidence was admissible under the hearsay provisions. H gave evidence in court, assisted by an intermediary.

R v P – The leading sentencing case for possession of a knife or bladed article.

R v F – Julie represented the prosecution at the first instant trail and subsequent unsuccessful appeal By Mr Fogel. This was the second breach of a restraining order, following a lengthy period of continual harassment by a TV producer of a colleague from school. He received a custodial sentence of 2 years for the breach, which he argued was manifestly excessive. The sentence was upheld.

Pupil Supervisor and Head of the Pupillage Committee

Julie sits as an Associate Judge and HM Coroner in the Sovereign Base Areas, Cyprus.